Why We’re Almost In a Stock Market Bubble

Twitter’s IPO on Thursday sparked a huge discussion worldwide on tech bubbles and overvaluation. I’d like to write about what a bubble is, why we are in the early stages of a bubble fueled by tech, and why that’s not a bad thing (yet). I’ll be addressing the issue from a macroeconomic point of view, rather than a purely valuation perspective.


Characteristics of a bubble


Generally speaking, bubbles begin forming due to some kind of disturbance: some new technology, a change in government policy, etc. For example, the dotcom bubble was due to the Internet, and the subprime bubble due to mortgage backed securities. This disturbance is fulfilled now with two factors:

The second checkbox is the boom, when prices rise and attract media attention, leading to increasingly large numbers of investors participating in the current game. I believe that this is where we stand now, though we have a bit to go before we enter the next stage.

Increasing prices by themselves don’t create a bubble. The fuel of easy credit (QE3) causes a boom to enter the mania/euphoria stage, where illogical speculation and margin trading begins. Here’s where psychology kicks in and takes over for logic – future growth expectations stop being grounded in sane foundations. Everyone wants to jump on the bandwagon, and those who are already invested merely egg others on to serve their own interest.

Then, some event pops the bubble and a vicious cycle begins where falling asset prices, selling pressure, and margin calls lead to ever-worsening conditions.


In context of historical trends, this year’s IPO stats are not alarming but merit caution


First, let’s consider today’s supply/demand characteristics. We’re currently experiencing low supply and high demand, but that seems to be beginning to change. If you take a look below, you’ll see that IPO proceeds are at reasonable levels, well off of all time highs. 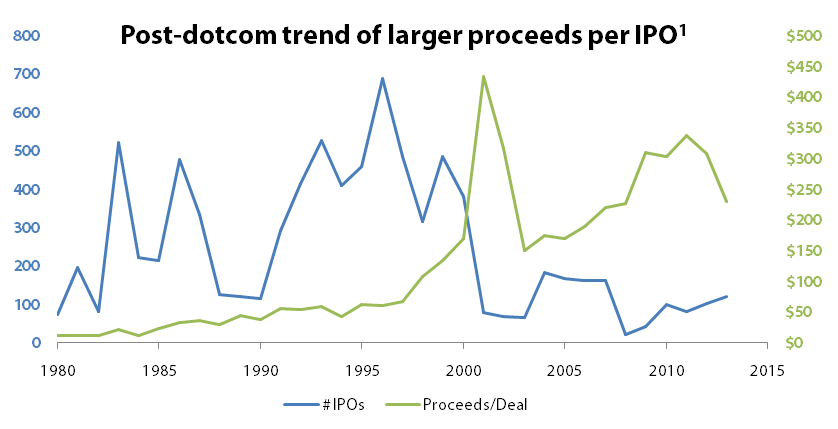 However, when you look at the proceeds per deal, you’ll see that today’s IPOs are larger on average and are currently trending upwards. (Note: the drop-off at the end is because of 2013 year-to-date data which only encompasses ten months).


Rising investor demand is fueled by availability of money


As a result of this undersupply, compared to the 1980-2000 period, investors nowadays have money they want to put to work. This availability of money is a concern going forwards, since investors who are chasing yield will be shying away from fixed income (which as mentioned before, is at historically low yields due to QE3).This is the fuel for the bubble.

Looking below, you can tell that the average first-day return (pop) is beginning to pick back up. By itself, pops don’t signal a bubble, but the undersupply of IPOs means each IPO is getting more and more attention, leading to higher pops. This seems to be the beginning of the boom stage; current first-day returns are rising past 2008 levels, where the lack of demand for IPOs following the crisis was tempered by underpricing to attract attention. As investors see more and more pops, this drives a virtuous cycle of increasing IPO supply and attracting investment, which is the engine that runs the boom stage.

IPO underpricing is where companies go public at a price lower than market equilibrium (e.g., Twitter’s $26 offering price vs. $45 first day close) which will lead to a stock pop. Companies generally don’t want to leave a lot on the table, but a lower offering price means less risk for the underwriters. When you look at Facebook’s IPO, Facebook did not leave much on the table, but underwriters had a nightmare of a day. Underwriters have to balance a host of factors, the solution for which is a moderate level of underpricing:

Looking above, you can see that during the heady days of 1999, first-day returns on pre-profit (EPS<0) IPOs were significantly than first-day returns on post-profit (EPS>0) IPOs. From this simple analysis, there’s no pattern here that enables us to predict these speculative sessions, but interesting to note is 2012’s speculative session; wish I had the time to dig through all the S-1s that year. Notably, post-profit CafePress IPO’d and dropped by 72% (2,3)), while pre-profit Envivio dropped by 82% (3,4).

Below, however, you can see that despite lower IPOs, a lot more are going public before they are profitable (or alternatively, a lot more companies are able toe go public pre-profit). 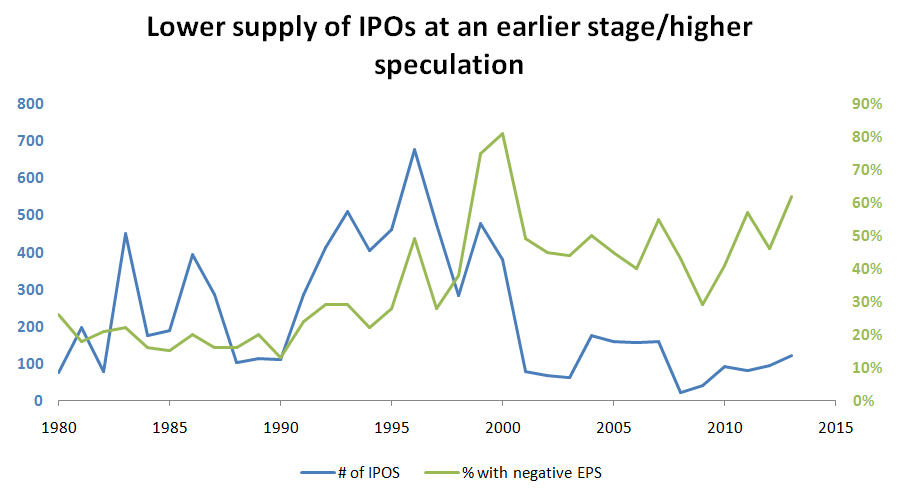 We’re not at 1999 levels, but we are getting pretty close, especially considering that the last uptick is only for the first ten months of this year, so it stands a chance to go even higher.

However, despite talks of overvaluation (see Snapchat’s recent round), the proportion of tech IPOs that were backed by VCs has risen. The conclusions we can draw from this must be taken with many grains of salt, but here goes:


Next year will probably be a good year for IPOs as well, but we must be careful


2014 is set up to be a good year for IPOs, though we need to be careful. Many startups may use this opening to exit and provide liquidity for founders that were stuck since the 2008 crisis. In terms of how IPO performance this year is affecting valuations during funding rounds, I think that both sides feed off of one another. From a pre-IPO valuation perspective, I do think Snapchat’s $3.5b valuation is a bit heady, but the current IPO sentiment may be causing VCs to overvalue companies and speculate more since it’s not easy to disassociate reasoning from current market trends (e.g., we'll definitely be able to IPO this startup in three years given the current trends!).

Lackluster M&A performance could be one reason why IPOs have been becoming more and more popular recently.
Disclosure: Any views or opinions presented in this post are solely those of the author and do not represent those of any company with which the author is affiliated. All data referenced is available to the general public.